I wrote 9 songs in one evening, chronicling my progress without shame. The past six months were the best in my life: surrounded by dear friends, falling in love, with music pouring out of me like a burst dam.

At the time I was obsessing over the artwork of my friend Jessica YH, and wanted to dedicate an album to her. I was also in the final awkward throes of my friendship with Kiri. She'd fled our house, Supermoon Mansion. I started these songs in her half-emptied bedroom as a quiet act of revolt.

The lyrics came from a series of lucid dreams — a tired cop-out, I know — about Kiri's ex, Jessica's characters, the Calgary Police (with whom I've had the mildest of antagonistic relationships), and the usual flying brain-garbage of dreamstuff. I was in the habit of writing it all down, a habit I've sadly lost. 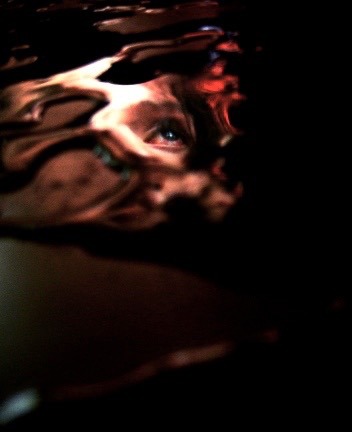 Making my way down the staircase in the morning, I was shot in the stomach by a ghost, and had to catch myself on the banister. "I felt horrible." Vertigo.

That evening, unable to eat all day, I dragged myself down the hill to the Roast for tea and fresh air. Freyja was there, my still-secret crush, and I tried to describe it to her by quoting my favourite TV show. I told her, "I feel like I'm being beaten up underwater."

These recurring episodes of sudden, unexplainable, knock-you-over dizziness culminated at a Psychic Alliance show with Freyja, where afterward, I sat in my car throbbing for an hour and a half, unable to see and constantly about to vomit, scared that if I tried to drive home I'd crash or hit someone.

This time, it left me deaf in the left ear to all sounds above the middle register. The specialist later told me nothing could be done to restore my natural hearing. The episodes of vertigo gradually faded out, but the pain in my ear and the inability to hear clearly continue to this day.

I then spent months trying to finish these songs, trying to make something I could feel confident in despite not being able to tell what they truly sounded like. For a few of them, I decided: better if they were intentionally painful to listen to, crackling and hissing and cranked up in the red. Others, I mixed so quietly that parts disappear into the fog. Some are emptied out, just the shell of a song, with no voice or no bass, just rhythm and hues.

Two and a half years later, I'm releasing a handful of those 9 songs. I might as well accept that this album is never going to be finished.

I modelled for Freyja at a fashion show in a furniture store. Here is the first-ever photo of the two of us together.

As I write this, many years later, we're married and have a daughter. I still can't hear properly and am still in pain. I've finished no music since.