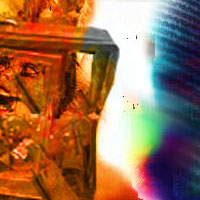 Away is a terrible album, likely my worst. However, it had one or two songs that really emerged triumphant, Cacodaemon most triumphant of all. I so enjoy cacodaemon that I'm giving it a page of its own, so it can be enjoyed separately from its rubbish kin.

In 2008 (ish) the pervasive trend in music was to grant every new band a bespoke genre of the "____wave" variety. So as this song took shape, I decided that it should be "glowwave", and then iteratively honed it toward a sound that felt quite glowy.