I moved to a new school in the eighth grade. While my previous school had a fleet of lovable Power Macintosh G3 All-In-One computers, the new school had an infestation of PCs. On the plus side, there were two copies of 3D Studio Max R2.5, and I promptly laid a 24-hour claim to both of those machines. After school each day, for hours upon hours, you'd find me in the library pushing verts and wrapping UV maps. After graduating, realizing I wasn't cut out to be a professional 3D artist, and floundering around aimlessly, I was surprise-hired by by Ed & Carl at CD Industrial Group Inc. as a 3D artist! Lo these 10 years later, I'm still employed there, though sadly I haven't touched a vertex in years.

Here are some silly images from various lunch breaks over the years, and a few after hours sessions at the office waiting for rides or friends (it's like high school never ended). 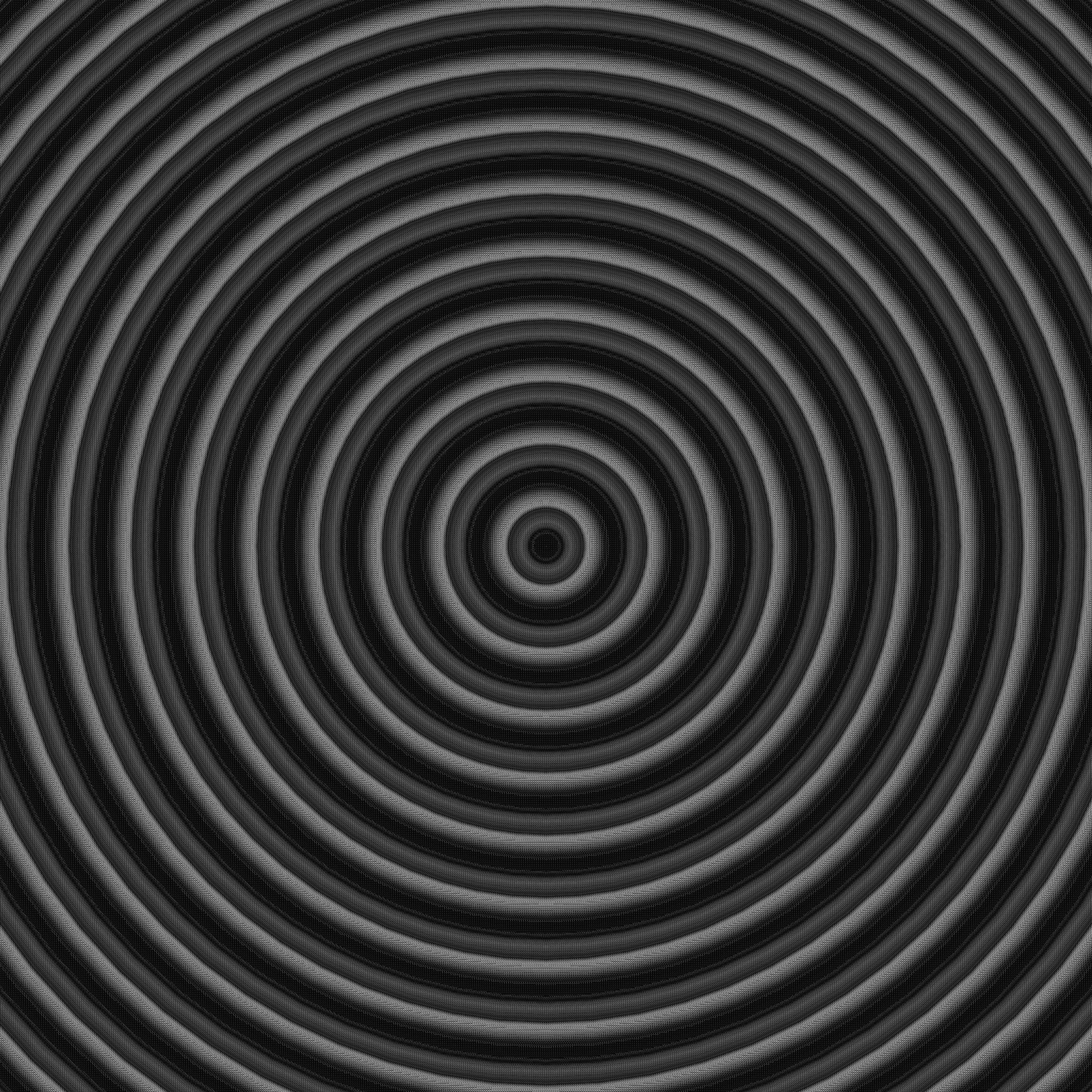 This was yet another still frame from an animation, and yet another 2D work done in a 3D program. I don't know what happened to the animation — it's probably on an old HD somewhere. This image was eventually used as the cover for my Mapping Creativity score. 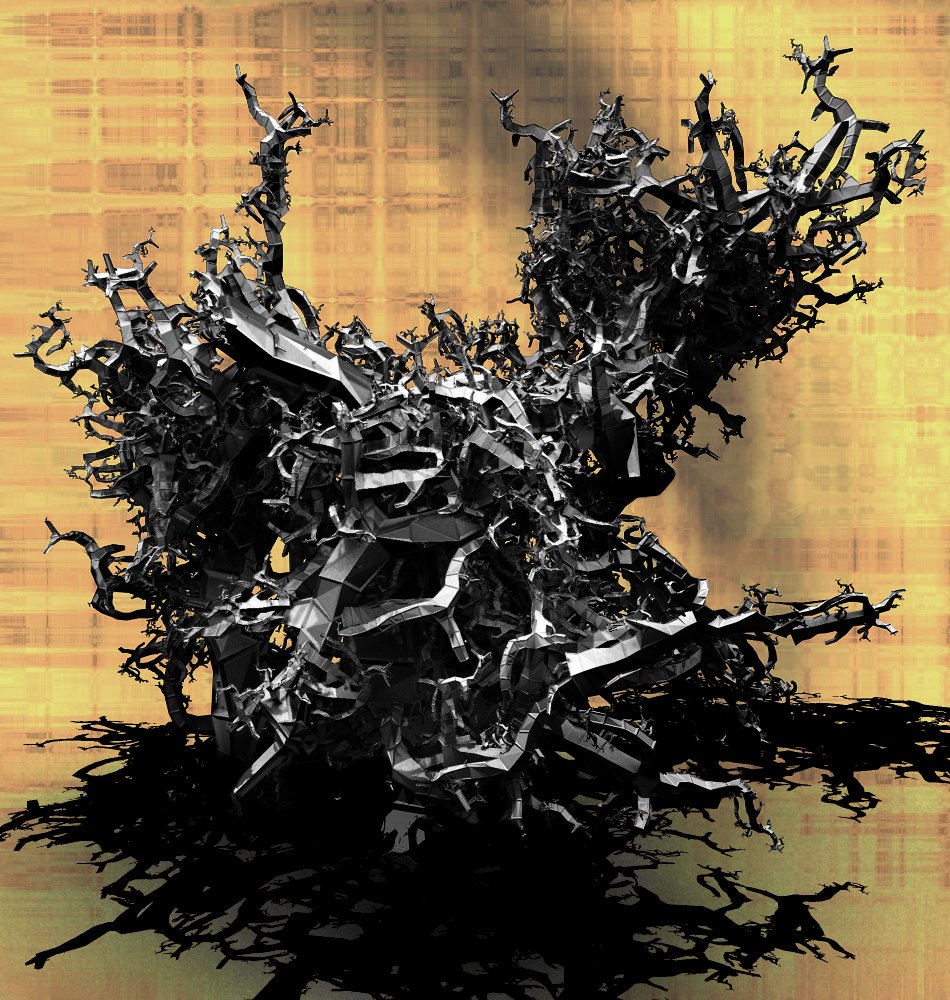 There are two ways I can explain this. The simple way:

An experiment with shapes. I created a (very) simple tree-like shape, with a couple of branches. I then told the tree to grow smaller branches, using the tree itself to determine the approximate shape of each branch. I then told these branches..... 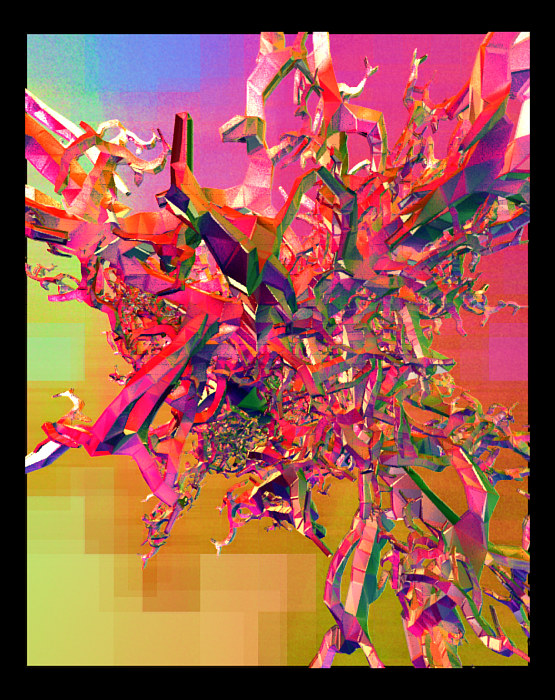 There are two ways I can explain this. The complex way:

I modeled a mesh in the shape of a simple tree. Low-poly, just a trunk with 4 sides and a few branches, no smoothing. I then told 3DSMax to randomly recreate variations of this tree, slightly smaller and scattered across the surface of the original. I then took the resulting shape, and did the same (recursively) to the 4th or 5th degree, until there were around 20 million polygons spread across 15,000-some objects.

I then created a shader that used ambient occlusion in a few interesting ways. Namely, the shapes are shaded, and the background is generated by the presence (or lack) of geometry in each bucket. Varying the bucket size then changes which buckets contain the mesh, and the background becomes far more complex as a result.

100% Procedural. Rendered with Mental Ray in about 4 hours. No Photoshop. 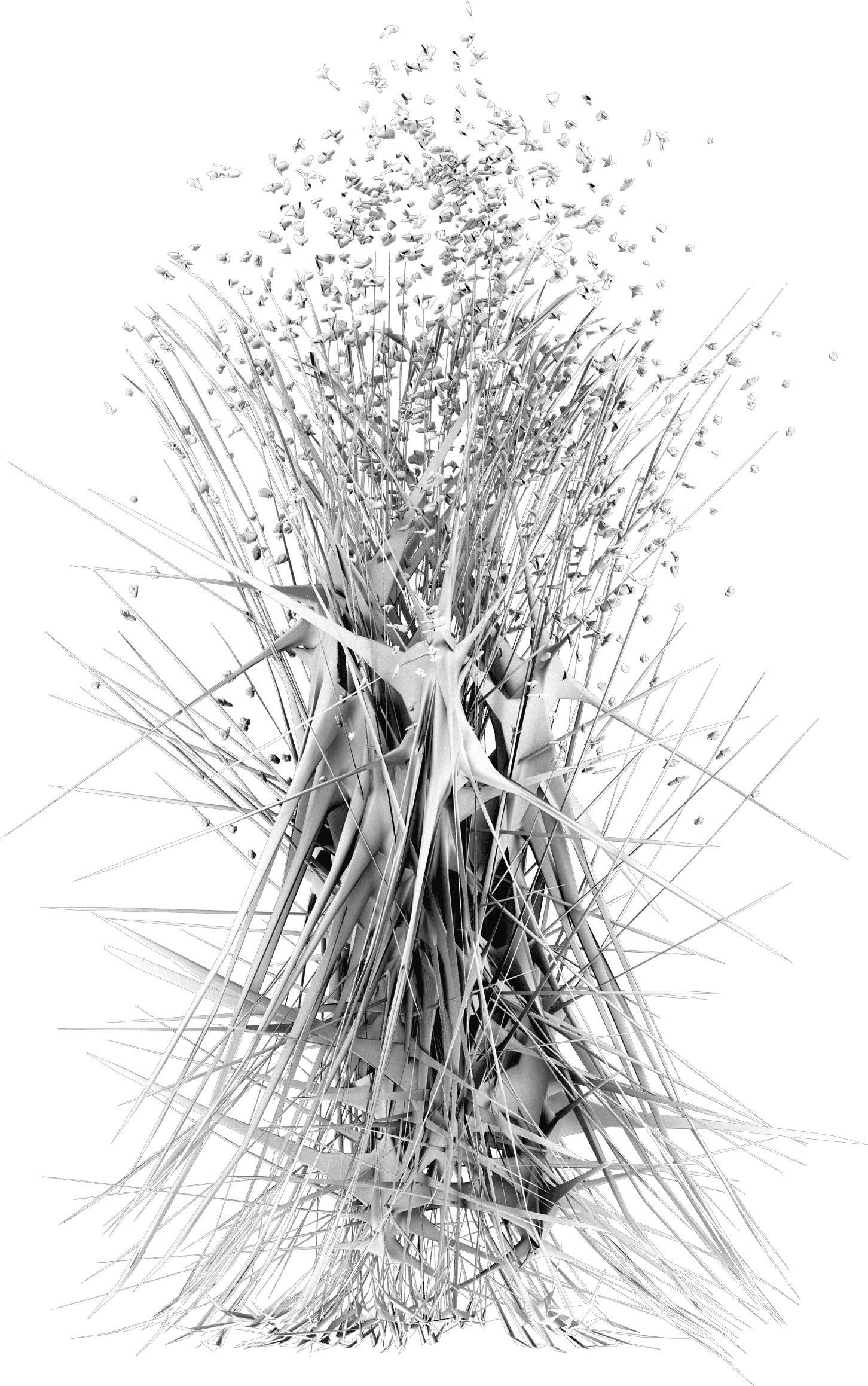 a little test of 3d abstraction 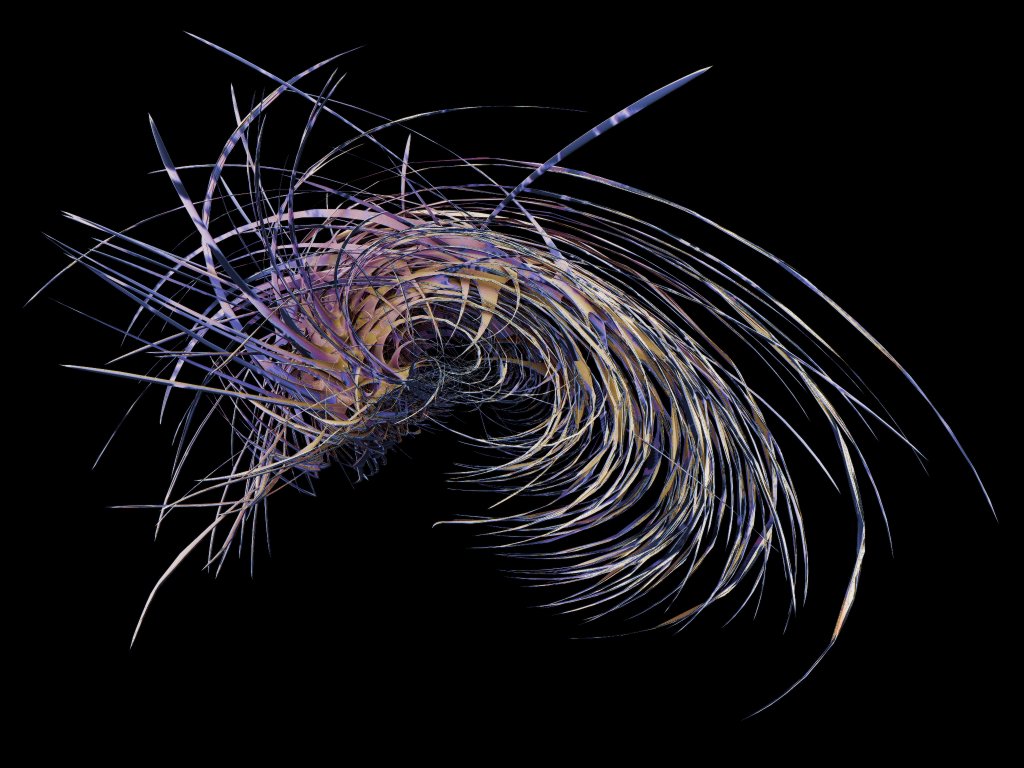 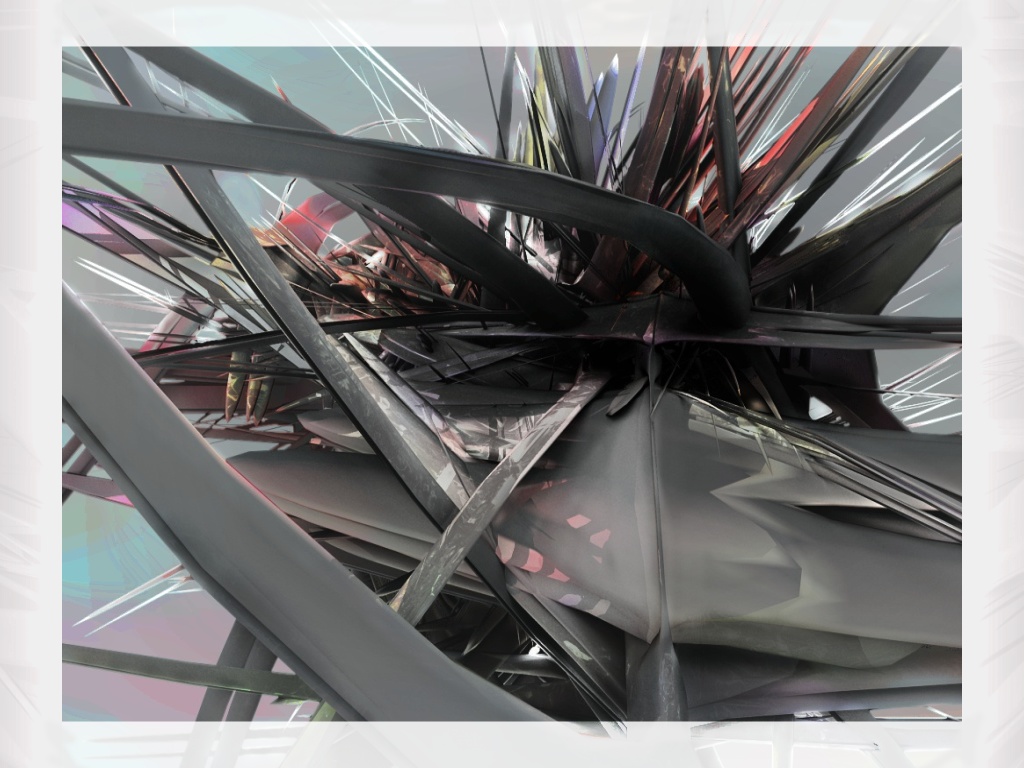 Remember 2006 when EVERYONE was making abstracts like this? Remember every Amon Tobin album cover prior to Chaos Theory? Yeah... that was a great album, and I was totally in on this fad. 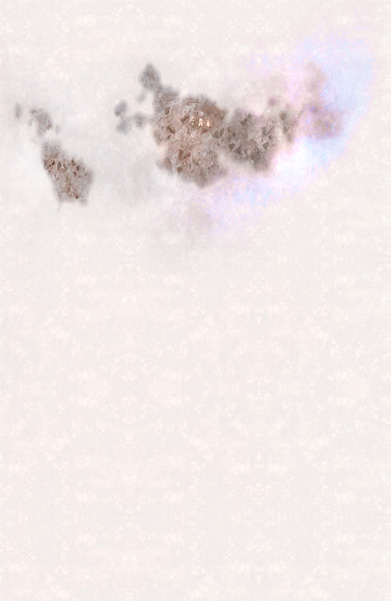 I so enjoyed 3D software that I often used it to produce 2D work. 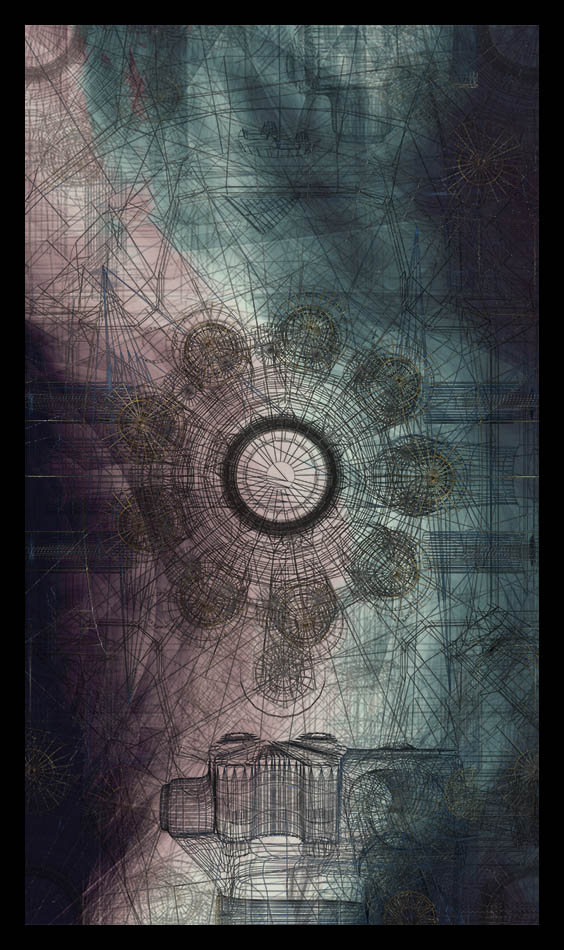 A mashup of some wireframes from my day job. 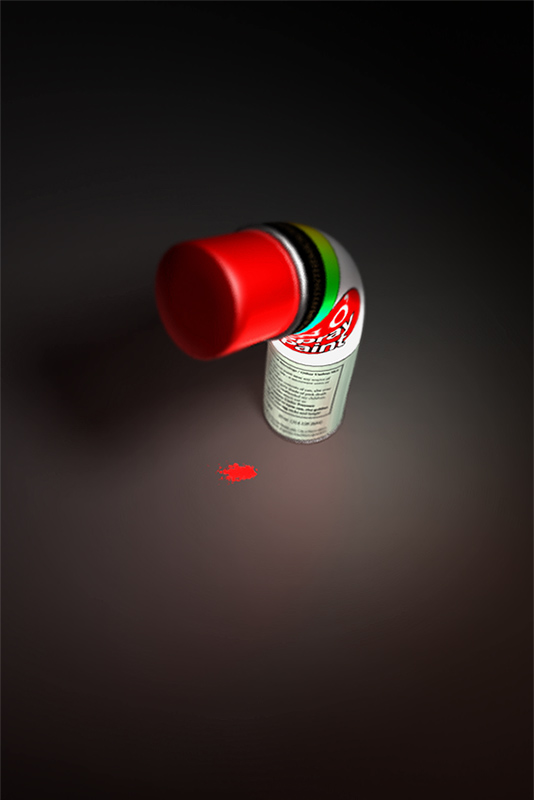 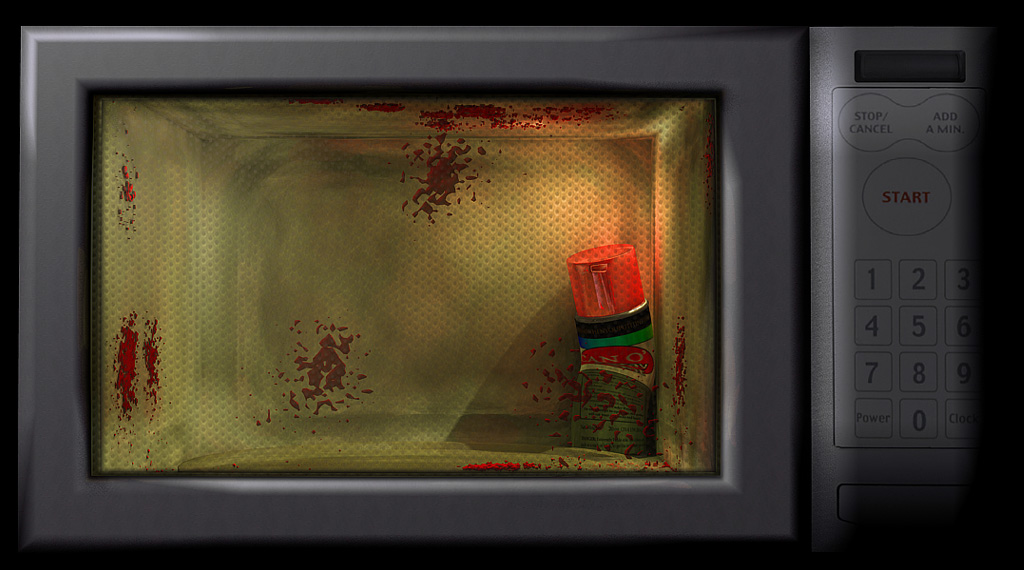 So That's What Happens / Voided Warranties

I was asked to make a video for a website called "So That's What Happens When You Put It In The Microwave". I made a cute little animation starring a can of spray-paint, with a villianous microwave that chases 'im down and blows 'im up, in classic Warner Bros style. But in a moment of utter failure, I saved over the source file before the project was finished. All that survives are these two (rough) still frames.